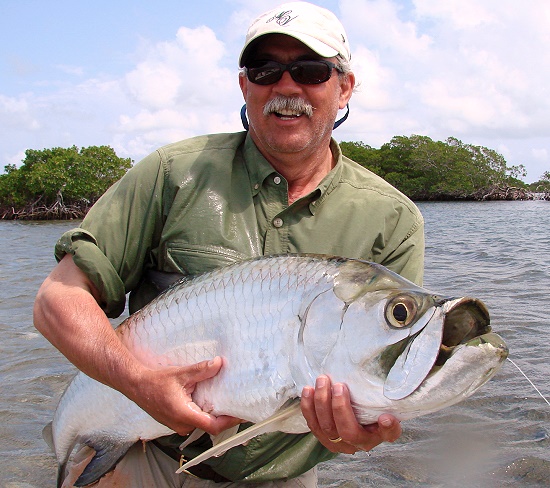 Peter with a Nice Tarpon

Our group experienced some great fishing at Turneffe Island Lodge for the whole week this past Spring. Our friend and fellow angler, Peter, almost landed a Super Grand Slam.

Collectively, our five skiffs boated eighteen permit which averaged 3.6 permit per boat (18 permit/5 boats =3.6 per boat). This compares to some of the best trips we have had at Ascension Bay.

The week began with great fishing conditions together with clear sunny skies and a smattering of clouds in the afternoon. A gentle relaxing easterly breeze produced mostly mild pleasant temperatures all week.

By mid-week the skies began to cloud up a little in the early afternoon allowing a welcomed afternoon break from the sun. Those partly cloudy skies in the evening provided some amazing sunsets. Thursday we had a heavy rain in the evening and again Friday morning. Once the weather moved on, we saw sunny skies with a nice breeze that resulted in great conditions for the remainder of the day.

Our colleague and fellow angler Peter Merriam experience some great fishing at Turneffe Island Lodge for the entire week of his trip.

First day on the water Peter scores a permit. Second day was the same – another permit. While Peter fished for all three major game fish, a Grand Slam was not his ultimate goal. Peter is a great guy and just enjoys quality time on the water. 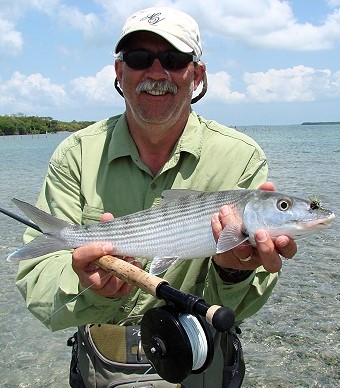 Peter with a Turneffe Island Bonefish

On the forth day of the trip, Peter came very-very close to a Super Grand Slam after hooking and landing a tarpon, catching a bonefish, catching a big snook, then hooking a permit, but losing it the a broken hook just as the fish was about to be landed. His third of four permit for the week came the next day.

Here’s the story: Wednesday morning (fourth day) Peter hooked into his first (of several) tarpon not more than a mile from the lodge. That would not be the end of his tarpon experience; he jumped another two tarpon in the same area. While his guide poled the boat scouting for more tarpon, Peter spied a nice snook to which he cast his fly and connected with a solid hookup.

On this particular day the bonefish was easy. A quick run to the outside flats, a few minutes wading and a nice bonefish was in hand.

Then, it was off to catch a permit. There were multiple casting opportunities that afternoon at permit and when Peter did hook-up it was a joyous but short lived moment. Peter was taken well into his backing by the large permit and did get the permit on his flyline, but then something in this day and age you would never expect to happen, happened. The hook broke.

Peter stayed out until dark trying for the final part of his Super Grand Slam, but it was not to happen this day. By the time Peter returned to the lodge in the evening, he was totally exhausted, but very pleased in spite of the loss of the final piece of the puzzle.

The lodge is situated on Little Caye Bokel, a 12 acre privately owned secluded island located 30 miles from the coast of Belize on 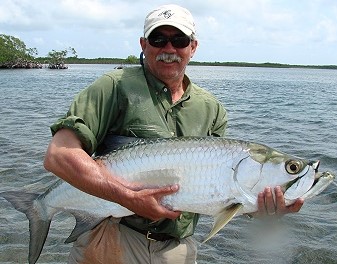 Peter with a Turneffe Island Tarpon

the south end of the Turneffe atoll (approximately an hour and a half boat ride from Belize City). This is a beautiful island and kept incredibly clean. The resort is meticulously landscaped, with flowers and ornamental plants of all sorts everywhere you look. A lot of money has been spent here. In short; this is a very well-managed resort, with excellent service, friendly people, excellent food and very clean and comfortable accommodations.

The lodge runs like a well-oiled machine. If you need something, just ask. The staff makes it abundantly clear that our job was to be on vacation and that their job was to make our vacation as fun and relaxing as possible. Every little detail of the service is thought out and flawlessly executed, like the early morning pre-breakfast tray of tea or coffee that finds its way to your porch. The staff to guest ratio is 1:1.

The cabanas are comfortable and well maintained, with delightful views through the palm trees to the incredibly blue sea. The air-conditioned cabanas have beautiful wood interiors, comfortable bed(s) and are spotless. The bathrooms are fine, but the outdoor shower are a nice touch, just what the doctor ordered after a long day on the flats.

There is a nice pool with outside bar. The pool bar is the central gathering point at the end of the day. This is a great place to relax and share your stories before dinner. 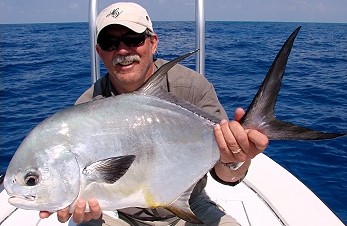 Peter with a Turneffe Island Permit

After forty years, the private island Turneffe Island Resort is still recognized as one of the top saltwater flats fishing lodges in Belize and in the Western Caribbean. With forty years of experience and the record holder for the most grand slams caught, this your assurance that Turneffe Island Resort has a quality fishing program and has demonstrated with a high level of service over and over again.

Fishing possibilities are endless around the Turneffe Atoll. Most of the Turneffe cayes are covered with thick forests of red and black mangroves. Turneffe Island Lodge is strategically located in the middle of the most productive area which provides quick and easy access to the coral reef and flats.

The productive interior flats, creeks, channels and lagoons are dotted by literally hundreds of mangrove that islands throughout the shallow interior of the Turneffe Atoll.

There are five dolphin skiffs which can accommodate up to 10 anglers. The rates for 2019  are $4,390.00 (12.5% tax not included)  per person for a seven-night six-day package with double occupancy (Saturday to Saturday). This will include transfers to the lodge, air conditioned room and meals. Not included are airfare to Belize, alcoholic beverages, fishing tackle, departure taxes, Gift Shop purchases, and items of personal nature. Click here for 2019 rates.