Ascension Bay Permit on the Fly

Ascension Bay Permit on the Fly 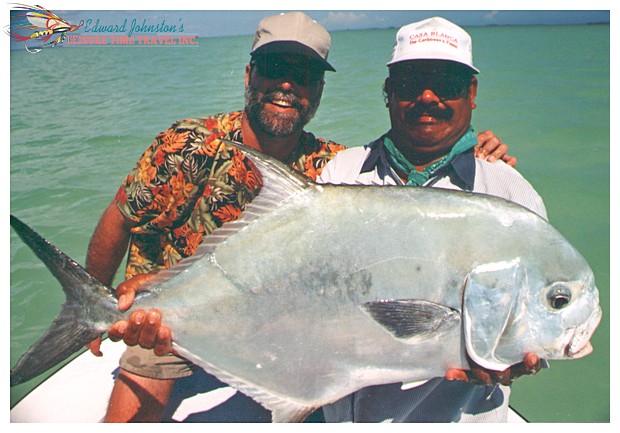 My good friend and client, Dr. Rick Weisenburger lives in a nearby State, but he occasionally has reasons to visit Florida. He called me recently and said he would be passing through my home town of Crystal River on a certain date and he would like to stop by and visit with me. I readily agreed as I like “Dr. Dick” immensely and always look forward to spending a little time together.

On the agreed date, Rick Weisenburger called me in the morning and said he would be by my travel office by noon. He was an hour early and I was quite surprised. Not by the early arrival, but by the souvenir he brought me.

You see, Rick Weisenburger, twelve of our fishing buddies and I had one heck of a good week permit fishing at Ascension Bay from Casa Blanca Lodge. As a reminder of the great time we had, Rick brought me a memento from our trip

Our group of fourteen anglers fishing out of ten Dolphin skiffs caught a total of thirty permit during this certain week. Rick Weisenburger caught several including the permit in the photo at the top of this story. Dr. Rick had a fiberglass replica made of the large permit he caught and bestowed upon me.

Wow….I was delighted. What a thoughtful gift! That huge permit is already mounted on the wall in my office. I gaze at it every day and reminisce about the many wonderful and exciting trips I have taken to the Yucatan. Thanks again Dr. Dick !!!

Edward Russell Johnston of Leisure Time Travel and a group of ardent anglers visited the Casa Blanca lodge at Ascension Bay during a blustery fall week. Despite the fact that three days of permit fishing were hampered by strong northeast winds and a cold front, our group of fourteen anglers caught 30 permit during the week!

ARRIVAL DAY – The undulating coast line of the Yucatan peninsula became visible from about 100 miles out in the Boeing 737. As we neared Cancun, the Caribbean water colors stair cased from the deepest blue, to azure, to aquamarine, to palest green where the waters lap the famous coral sand beaches. 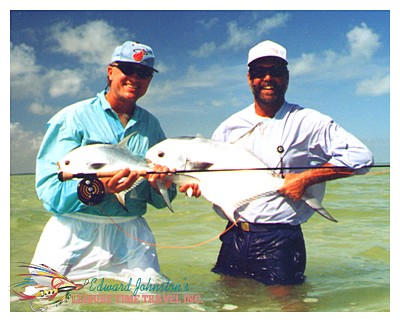 The first breath of Gulf air became fact. The warmth of the Caribbean was apparent. Once through customs, we were quickly back into the air on a charter flight to our final destination, Ascension Bay. Soft trade wind clouds floated in a clear blue sky. Islands appeared with luxuriant vegetation shading white sand beaches.

A fine rain scattered on the windshield as we started our decent toward Casa Blanca. The water below was a myriad of turquoise and blues. We could see palm trees spread far along the shore. The coral reef edged deep blue water. The lumbering Cessna Carvan landed at Punta Pajaros (Pa-ha-row-s) just a short distance from the lodge. “Team Homosassa” was on the ground. Fourteen eager anglers were ready to tangle with all Ascension Bay had to offer, especially the wily permit.

DAY ONE – Our first permit fishing day was great. The sky was clear and the weather was very nice with warm temperatures and a prevailing wind. Our group caught 11 permit that day.

DAY TWO – A cold front moved in slowed things down. The wind changed to the northeast and started too blown hard. Thunder clouds overspread the whole heaven and only occasionally was the sky clear. Light showers in the afternoon became torrential the evening. We caught two permit.

DAY THREE – A Total blow out. It rained hard and steady. The wind was so high it was extremely difficult to fish. No permit. We did have a great party in the lodge that night! 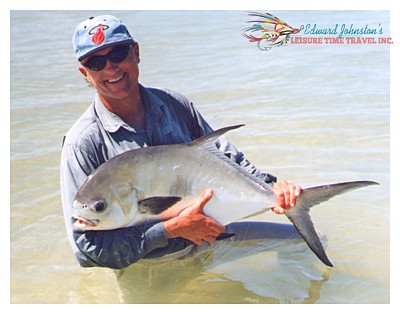 DAY FOUR – The wind was still from the northeast but staring to slow down a bit. The temperature had dropped considerably from the beginning of our week. The main bay was still muddy from the turbulence, but there were areas of clear water. We caught three permit.

DAY FIVE – The morning was fresh. The clouds parted and the sun burst through. There was still a mild breeze from the northeast but the water cleared and the tide was right. Most of the casting was into the wind, but we caught 11 permit. All the permit caught on this day were big fish. Most of the permit were in the 15-20 pound range, but one was in the mid-thirties and the whopper permit caught by Dr. Rick Weisenburger was even larger; an exceptionally good day of permit fishing in any angler’s book.

DAY SIX – Last day. The wind shifted to the west with a mild breeze. There were plenty of permit but they were very spooky. We caught three permit, one of which was well more than thirty pounds. (Note: most of the anglers had 30# Boca-grips for weighing so when they bottomed out we had to estimate)

I would consider this an average fall week at Ascension Bay. Sometimes you will get balmy weather for weeks at a time, but this is fall and cold fronts affect the Caribbean. The angler rarely gets perfect weather for the entire trip. I tell my clients if you get more than three good days of fishing out of six this time of the year you are lucky. Call the specialists at Leisure Time Travel today and get the counsel to assist you in booking the best fishing adventure you’ve ever experienced.

Edward Johnston, of Leisure Time Travel, has visited the Yucatan peninsula  30 times in the past twenty years and has caught 80 Ascension Bay permit with a fly rod .

Why take chances with your precious time? We’ve been there numerous times. There is no substitute for first-hand experience.