It’s time to continue our story filled with adventure on a path less traveled, the rediscovery of a world class fishery and one of the world’s most spectacular marine attractions. Fly fishing for the elusive Turneffe permit. 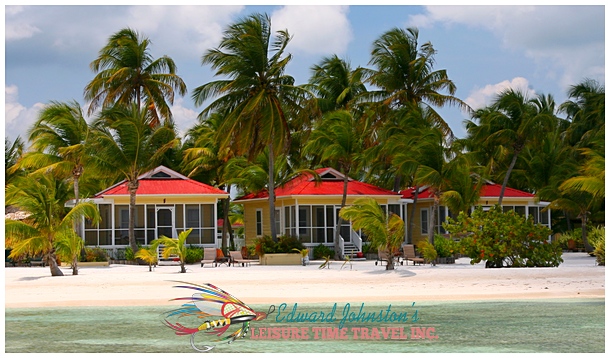 Fishing for the Turneffe Permit

For the past few years, this fishing trip has been an annual pilgrimage to the piscatorial Garden of Eden “Turneffe Island” in search of the elusive Turneffe permit.

I do know a thing or two about this part of the world given my beat, so here’s the story. 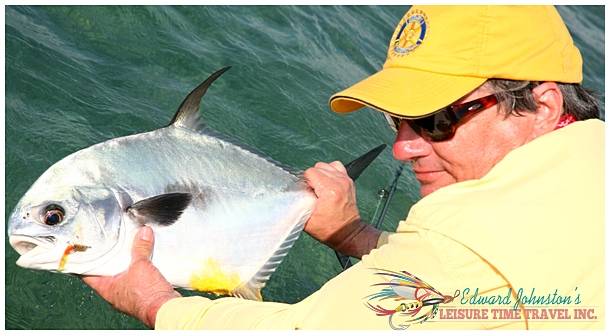 Here on the Turneffe Atoll the fish seem to outnumber the people one-million to one. For permit anglers, this is one of the best places in the Caribbean to have numerous honest shots. 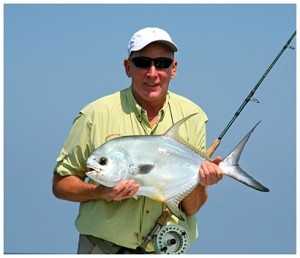 Permit fishing is different for each individual. Generally, permit are just another exciting flats species. However, for some anglers they are worshipped as the highest form of piscatorial pursuit. It’s a high art attained by many years of experience on the flats plus a fanatical attitude as single minded as samurai.

It’s the relentless pursuit of permit that keeps anglers retuning to places like Turneffe. Unless you have been here there are no words that can adequately describe this beautiful coral atoll. You will find one of the world’s most pristine marine environments the planet. Indeed, most of the best saltwater anglers in the world have come down to pursue the sly permit.

Out here on the Turneffe Atoll the tide tells the time. Every day is a little different. 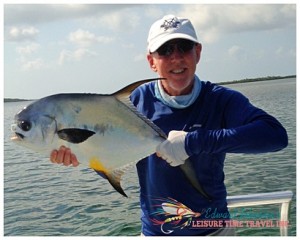 The guides here are among the most experienced anywhere, especially Tacu whom I have fished with for a very long time.

One particularly beautiful day a constant north east wind ruffled the surface of shallow lagoon. Tacu swung the skiff around and shut down on the lee side of a mangrove island which gave a break from the feathery wind.

We had our spell of intermittent cloudiness however at the moment the sun was brightly shinning. The sandy bottom potholes reflected the tropic sun. Sea fans and sponges wobbled in the current among ledges of beautiful coral. Aside from the calls of the gulls and the slight sound of the coral sand beneath the push pole the tranquility was wonderful

We spied a glassy tail breaking the calm waters surface. I made the cast and slowly stripped until the fly was within a few feet of the permit and was characteristically ignored. 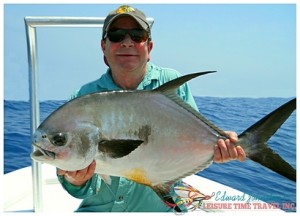 Our guide Tacu really wanted this particular permit very much and was finding fault with my fly presentation and was looking for a degree of perfection in my casting abilities found only in Heaven.

I made another cast, almost head shot. The permit tailed again. I set the hook and the permit took off like a bat out of hell.

The fish were extra spooky on this fine day so I had dropped down to a 12 pound test fluorocarbon leader rigged on a large arbor Able Super 10 with 30 pound Cortland micron backing.

For permit, I usually set the drag at 10% to 15% of the tippet strength which is fine when you have the fish in close. As your line leaves the reel the drag increases due to decreasing spool diameter plus the effect of friction and water resistance. 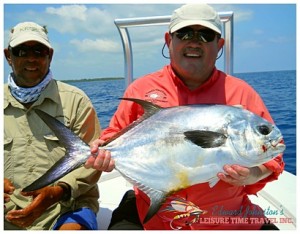 This permit was screaming off toward the horizon and I was quickly running out of backing.

With no time to chase the fish I turned to my boat partner and good friend Bill Rychel and said “Bill, you should never increase the drag on a running fish, but in this case I have no choice” It was just a few seconds after that when the fly parted ways with the line. Tacu was pissed “What the f— did you do that for”? I was having a hard time pleasing the master on this day.

Author’s note: Tacu acts like that around me because we are friends and he holds me to a higher standard. Don’t worry, if you fish with Tacu, he will not berate you!

Tacu stepped down from his observation post atop the polling platform to unload a cooler packed with a delicious lunch prepared by the ladies back at the lodge. Afterward, we all celebrated my misery with cold beers.

On this particular 2013 week our five boats really did very well permit fishing. Our group landed 21 permit (average 4.2 per boat) which is considered very good anywhere including Ascension Bay or Espiritu Santo Bay. 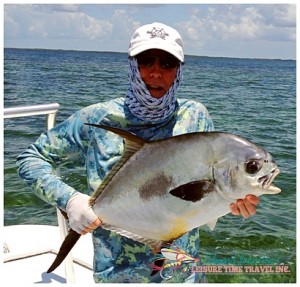 In fact, during the past four years, each annual Leisure Time Travel group trip at the Turneffe Island Lodge, our anglers averaged three permit or better per boat for the week. This is exceptional permit fishing !!!

The Turneffe atoll is a vast maze of cays and flats with numerous good looking shorelines and mangrove estuaries.

Out there the sheltered waters are crowded with bonefish, tarpon, snook, grouper, snapper and jacks. In the ocean depths beyond the drop-off swim wahoo, kingfish and billfish.

For the ordinary angler, it’s bewildering dilemma where to start to fish. That’s where your guide comes in. Most of the guides at Turneffe Resort have been fishing these waters for decades.

For the seasoned angler, permit, bonefish, tarpon and snook are in the areas where you would expect to find them. Of course, we all know that is not necessarily true as we are often surprised. That is why I always have another rod ready for my intended species. 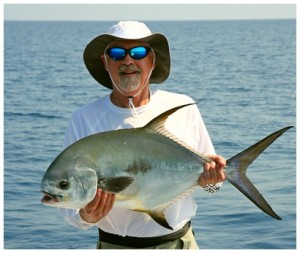 Permit inhabit much of the waters of the Turneffe atoll. You will find them inside the reef, in the channels intersecting the perimeter of the island, around mangrove islands and just about everywhere else within the atoll.

Bonefish are primarily found in the shallow waters inside the coral reef. Here you find a crunchy bottom and stealth is really not in your favor. You will also find bonefish in certain areas of the interior of the lagoon, but not usually in the numbers near the reef.

Tarpon are primarily migratory, but there always a few around. Best places seem to be the channels intersecting the perimeter of the island.

Snook are not plentiful but can be found along the mangrove shorelines especially near the deeper creeks. Plus you have Barracuda, jacks, snappers and a multitude of reef fish …. 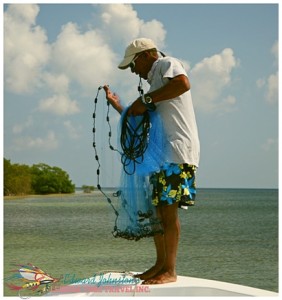 One evening we made preparations for a run offshore to catch Queen Snapper, one of the most prized and best tasting fish in the ocean. First we needed to secure bait and our guide Tacu knew exactly where to find some live sardines.

After the bait was secured in the bait well we proceeded out to deep water just past where the Sayonara lays on the bottom. The Sayonara was the transport boat for the Turneffe Island Lodge. It was sunk by former Turneffe Lodge owner Dave Bennett in 1985.

We were deep dropping our rigs to 400 feet with three pounds of weight. It was easy dropping the rig down, but not so easy reeling up. Electric reels would have been nice. It did not take long and we had a cooler full of Queenies. Tacu cranked up the engine and we headed home just as the sun was setting.

The following evening the kitchen staff prepared the Queen Snapper. The sizzling fish dish went straight from the kitchen to the table and disappeared almost as quickly as it arrived. 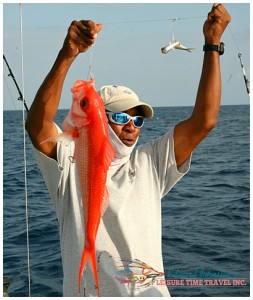 Saturday morning is here. This vacation went way to fast.

I am savoring the last few minutes of this paradise before we depart. Here on the Turneffe Atoll I am standing on the top of a submarine mountain. From my vantage point on the upper deck of the Turneffe lodge I can see a few bonefish happily tailing. Near shore the crystal clear turquoise waters drop off to cobalt green then to cerulean blue and finally deep sapphire indigo. What a place!

Over the top experience! This is truly a paradise. You will arrive as strangers and leave as friends.

We look forward to sharing our experience and expertise to make sure your next fishing vacation is a success.

To read part one of this report click here.

We would like to arrange your next trip to Turneffe Island Resort or one of the other fine lodges in Belize.

Why take chances with your precious time? We’ve been there. Remember, There is no substitute for first-hand experience. 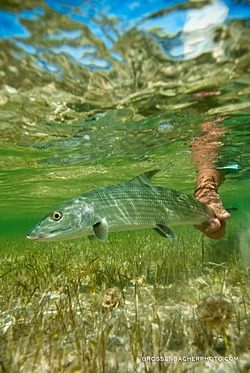