What’s nice about living in Florida is the close proximity to the Bahamas. Some islands have a direct flight or direct charter service from Florida and most of the remaining islands are accessible in two hops. And yet for anglers living in the eastern US, there is no reason to go half way around the world when there is incredible world class bonefishing in the Bahamas and many islands within a single day’s flight.

The weather channel tells me that New England is currently getting buried with snow. On this bright and sunny January day I am riding in a comfy Embraer 190 jet from Orlando Florida to Nassau, where I will catch a short hopper to South Andros Island. 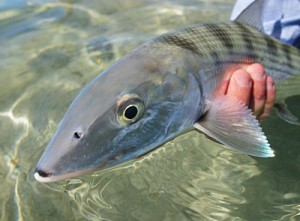 Thirty minutes into the flight we are passing the west end of Grand Bahama Island with her white sandy beaches and water as clear as glass.  Tropical palms and Australian pines border the south shore.

We pass through a frontal band of heavy cumulus clouds, an ominous sign of tomorrow’s weather.  I have been in this game a long time and sometimes it is what it is, you just deal with it.

We landed on time at Nassau International Airport. I picked up my bags and breezed through Customs and immigration quickly, then on to the gate for my short flight to South Andros Island.

Over the years I have probably made 80 trips to the Bahamas and numerous trips to Andros Island.  My first trip to North Andros Island was in 1988. My first trip to South Andros was in 1991, which was twenty-five years ago, and I can tell you, not much has changed. The pace of life is mellow and relaxed. A few new buildings here and there but otherwise it seems time has stood still, which is a good thing is you’re an angler in search of a remote bonefish destination.

Andros Island is located approximately 150 miles Southeast of Miami, and about 30 miles Southwest of Nassau, New Providence, Andros is still one of the least developed. 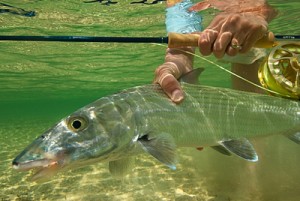 Andros Island is divided by inland creeks and large channels, called bights. The island is comprised of clusters of large and small cays connected by mangrove estuaries, saltwater marsh, tidal wetlands and sandy beaches. When the whole thing is combined Andros is the largest of the Bahamian islands.

South Andros is part of the Andros islands that make up the 2,300-square-mile Andros chain.  One mile off the coast of the island lays the third largest barrier reef in the world, the Tongue of the Ocean where the water depth plummets to 6000 feet. The reef runs approximately north to south for about 170 miles. Cool waters from the depths flow upward against the walls feeding an unbelievable fishery. Just off the reef in deep water are Dorado, Tuna, Sailfish, Wahoo, and Jacks. On the reef are Barracuda, Snappers, and Grouper.

Andros is surrounded by hundreds of square miles of fish-able flats known worldwide for trophy bone fishing. It’s no secret that one of the largest populations and largest bonefish are found on the flats of South Andros. The south and west side flats are isolated and renowned for large, unpressured bonefish. Some of most consistent fishing in the Bahamas Islands is on South Andros and that is why it is considered the Bonefishing Capital of the world.

Bair’s Lodge is located on the southeastern side situated between Deep Creek and Little Creek. These creeks open out into a broad area of inland flats, with hundreds of small cays and connecting channels covering more than 100 square miles.  You will be fishing areas like Beach Cay, Grassy Creek, Hawks Nest, Cistern Point, the Curly Cuts, Jackfish, and Water Cays to name a few.

I will tell you more about Bairs Lodge and the fishing shortly, for now I will enlighten you on the research of the Bonefish and Tarpon Trust

The Bonefish and Tarpon Trust

This past January the Bonefish and Tarpon Trust (BTT) scientists were conducting research on spawning bonefish on South Andros Island, Bahamas.  Bair’s Lodge had generously donated the space and boats for the scientists to perform their work. 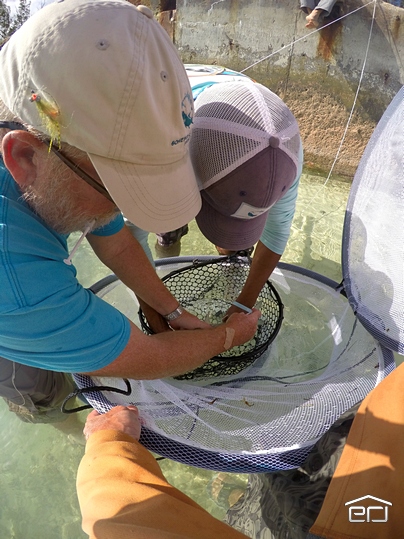 I wanted to see first-hand the work and research that the Bonefish and Tarpon Trust (BTT) scientist performed, especially the spawning research.  I can tell you it was a very interesting trip as I was able to see firsthand how the BTT scientist went about their business. The BTT crew shared their information freely at every opportunity and it was a great learning experience.

The BTT team initially tried to use seine nets to capture bonefish for tagging however the weather was not cooperating and the fish seemed to prefer the deeper water.  So, the fly rods were brought out and bonefish were caught.

The BTT team had deployed acoustic receivers around South Andros Island to track bonefish spawning migrations. Acoustic tags were placed on some of the captured bonefish which gave a good indication where the fish were headed to spawning sites. And as a result one huge spawning aggregate was found and observed. This information is important to protect these important spawning locations.

Other duties included tagging bonefish to collect information on bonefish movements and collecting fin clips for the Bonefish and Tarpon Genetics Program to help understand how the bonefish populations in different locations are related.

After bonefish spawn in deep water near full moons, the larvae that hatch from the eggs drift in the open ocean almost two months. Some of the larvae may remain in the local area while other larvae may drift for hundreds of miles to places far removed from the spawning sites. 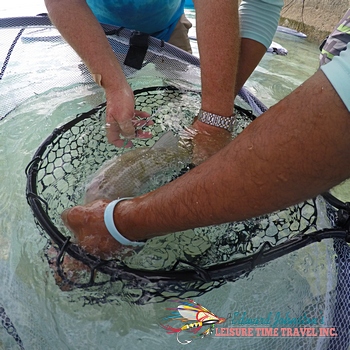 The BTT scientist are conducting research to hatch fertilized bonefish eggs and may start an Aquaculture Center in South Florida to breed bonefish to replace those lost to the breeding stock in elsewhere in the Caribbean. After watching their efforts on South Andros I have no doubt they will succeed.

How You Can Help?  Join the Bonefish & Tarpon Trust.  BTT will provide you with envelopes for saving the fin clips and collecting information like location, date, and bonefish size. When you return home just send BTT the completed envelopes. Collecting the fin clips for genetic analysis is that simple.

And while you are at the BTT website you will notice a huge amount of information, not only on bonefish, but permit and tarpon research as well.

Please click here to view a short video of Bair’s Lodge and the Bonefish & Tarpon Trust scientist at work.